One hundred years ago many towns in Ireland had their own thriving woollen mills. Ballinacree also had its own mill. Its history may go back 250 years and possibly it started as a flax mill. What we know for certain is that Joseph Forde ran Ballinacree Woollen mills from c1848 until 1856 when Henry Matthews became the owner and manager of the mill. The mill, or ‘the factory’ as it was usually called, employed about twelve people. 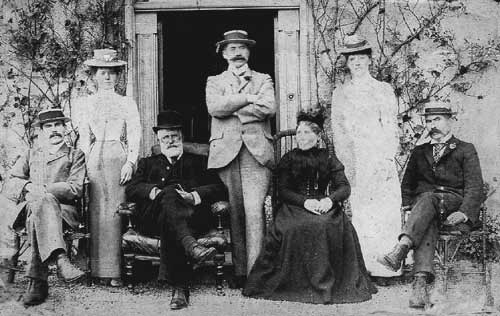 The Matthews Family.
Owners of the Woollen Mills
about 1900

Mr Matthews bought wool from the local farmers and had it woven into tweed, blankets and rugs. The mill had five looms and the machines were powered by water wheels in the River Inny which flows through the property. The factory buildings are still standing in the yard around John Wiggins’ house.

In 1910, Ellie Frances Matthews daughter of Henry took over the running of the mill with the help of a manager. The factory was still in operation in early 1923 when it supplied over one thousand blankets via Patrick Mullen to the new Irish Free State Army. For a number of reasons the factory closed down later in 1923. On the occasion of the death of Ellie Frances Matthews in 1939 the property was bequeathed to her grand-nephew John Wiggins.