Before we came along: Our Ancestors

Who are we?  We are descendants of pre-Celtic, Celtic, Viking, Norman and English ancestors – with some new genes now being added. Here we take a fast run through the events and people that shaped us.

What was this area like for the earliest inhabitants of Ballinacree? The cairns on Sliabh Na Caillaige were built at least a thousand years before the Celts arrived. These and the many ring forts or raths, dúns and the souterrains tell us that humans lived in this area from as far back as perhaps three thousand years BC.

The ring forts and souterrains were built from early Christian times up until the coming of the Normans in the 12th century. The majority of the people were probably cattle farmers and built the forts for the protection of themselves and their livestock. They lived off the produce of the lands, by hunting and fishing. The place name and ring fort at Lisard in Ballymacad tells us that it was a cattle compound (high enclosure). Other place names like Rathmae (Maeve’s fort) and Rasillagh (Rath Sillagh or Sallow fort), Rathiever, (Rath or fort of Iver) and Dungimmin (Dun gCuimin, the Dun of Cuimin) also tell us of early inhabitants. The souterrains were built as an underground safe area for people and also where they stored their provisions. They were built in such a way that any enemy trying to enter had to crawl in head first which left them exposed. This is very obvious in the souterrain in Crossdrum.

The entrance was also built higher than the passageway and beehive cavern to ensure the inhabitants could not be smoked out. There are four known souterrains in the area; one in

Some archaeologist believe that the 6000 year old passage graves at Loughcrew may be the oldest burial ground in the world. It is probable that Sliabh na Callaigh was also a religious centre for the early inhabitants of Ballinacree

Crossdrum Upper, one in Crossdrum Lower and two in Moat. They were usually built in close proximity to forts, most of which have long disappeared. However it is highly likely that there are many more undiscovered souterrains in the area. The inhabitants lived by the Brehon Laws and the chief of the clan was the king and collected the taxes, which were paid in kind. Cattle, pigs, goats and even slaves were used as payment. Challenges to the king, including from clan and family members could be met with gruesome punishments including banishment, or the removal of limbs or eyes.

Our area gets a mention in the conflict between Breifne O’Rourke and Diarmuid McMurrough which led to the coming of the Normans in the 12th century. When the Normans / Anglo Normans came to this area they built what is known as mottes and baileys and also castles and bawns. In the period 1172 Hugh de Lacy, gave a large tract of territory centring on Finea and extending south and east of Lough Sheelin, and far as Loughcrew, (This included Castlecor formerly Tipper Messan) to Matthew Tuite. Around 1216 it was taken off the Tuites and given to Walter De Lacey, brother of Hugh.

The Gormanston Register of 1271, has a later reference to the property of the Tuites. It was restored to Richard Tuite for: “3 services, 24 carueates of land in Killeiwen (Killallon) and Tibermessan in the honor of Fauoria (Fore).” 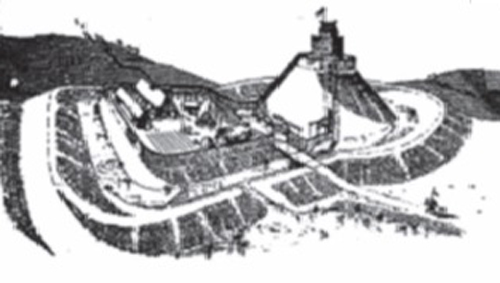 A model of a typical Norman Motte and Bailey dwelling

Castle sites of the period may be traced to Castlecor, Oldcastle, Ballymacad, Moat, Racraveen and elsewhere.

In Sweetman’s Calendar of Documents, 1302-6, the parishes of Kilbride and Killeagh appear under the name Moymany. Tipermessan (Castlecor) is given as a distinct unit. The various references show that the ancient territory of Moymany—Magh Maine, the plain of Maine—extended eastward from Loch Sheelin to the Loughcrew hills. It is mentioned by the Four Masters in 1452. They record that the Earl of Ormond, Lord Justice of Ireland, marched northwards through Offaly and Annaly and then Fore, and from thence to Magh Maine where the O’Reillys came to his house and acceded to all his conditions. 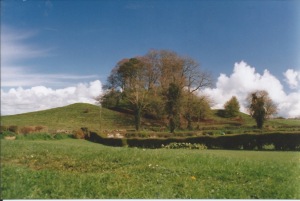 In the 14th century it was part of Clonmahon ruled by Mahon O’Reilly. The territory of Magh Maine was named from Maine son of Niall of the Nine Hostages. The tithes were paid to the abbey of Fore. Tippermessan paid 2s and 8 pence and Moymany paid 2s which was a tenth of the value of the produce. The O’Reilly’s were in constant conflict with the advancing Anglo Normans chiefly the Tuites and later the Plunketts and Nugents. Mahon’s son Thomas erected Caisléan an Locha – the Castle of the Lake – Crover Castle. In a single day Tomás, son of Mahon, levelled eighteen castles that the Tuites had built, and not a single one of those castles was rebuilt since. Thomas’ son Richard and many of his family were drowned in Lough Sheelin in a boating accident. In the early 1400’s the Plunketts took possession of the lands around Loughcrew and the Nugents around Ross. In the Annals of Breifne, it is stated that the section of Clanmahon, taken possession of by the Plunketts and the Nugents, extended southwards to Beal Atha Na gCeannaidheadh, (now Millbrook) and was the scene of many conflicts some of which are mentioned in the Annals.

Around 1506 Thomas son of Oliver Plunkett was slain by Calvagh son of Phelim O’Reilly and in consequence a war broke out between the Old Irish and the newer Norman descendants. The castle of the lake was used as a military fortress and jail up to mid-1600’s and was used by Owen Roe O Neill prior to and during the 1641 rebellion. Edmond O’Reilly, brother of John O’Reilly Sheriff (or MP) of the newly created Shire or County of Cavan lived at Kilnacrott. Myles O’Reilly (Myles the Slasher) was the grandson of Edmond. The county boundaries were fixed around the end of the 1500’s or early 1600’s.

What about the Nugents? Sir Gilbert de Nugent came to Ireland in 1171 with Hugh de Lacy. He married Hugh’s sister and was given the lands of Meath and Westmeath and a castle built by de Lacy. He became the first Baron of Delvin. The families involvement with Cavan and this area of County Meath began in the 1500s, when the power of the Clan Mahon O’Reillys began to decline. Clan Mahon at this time extended deep into the modern counties of Meath and Westmeath.

In 1532 Richard Nugent, 12th Baron of Delvin (the Black Baron) built Ross Castle on the southern shore of Lough Sheelin on the site of an earlier O’Reilly castle. The story is told that after the battle of Clogh Oughter between the O’Reillys and the Nugents that Orwin O’Reilly was recovering from injuries at Crover Castle. He was discovered there by Sebana daughter of the Nugents and she tended to his wounds, travelling across the lake every day from Ross Castle. However she got fever and could not visit for a few weeks. When she returned she discovered Orwin had died from the same fever. He was buried in Ross. She later died from a broken heart and was buried with him.

It is said that they both were buried standing up so that they could have a view out over the lake. The Nugents remained a Catholic family during the Plantation of Ulster 1609. They held a lot of land in Cavan but most of it was lost after they supported the 1641 rebellion alongside former enemies the O’Reillys including Myles (The Slasher) O’Reilly.

Monument to Myles O’Reilly “The Slasher” in Finea