The Parish of Killeagh (Cill Fhiach) derives its title from St. Fiach whose festival was traditionally held on the first of November. Today the only reference used to the name is when speaking of the old cemetery.

There were actually two churches built in Killeagh. No traces of the original church remain as the stone was used to erect, on the same site in 1810, the protestant church, which was in use until its closure in 1941. There is some doubt about this date, as it is known that a funeral service was carried out in the church later than 1940. It is most likely that the church was closed to Sunday service in 1940, but remained in use until it was officially deconsecrated in 1954. The church was finally demolished in 1959. The extension to the graveyard to include the protestant section was added sometime between 1837 and 1913. There is no direct record of when it was built, but since a map of the local area in 1837 contains no evidence of the extension and another drafted in 1913 does, it is reasonable to assume that it was built in the intervening years. 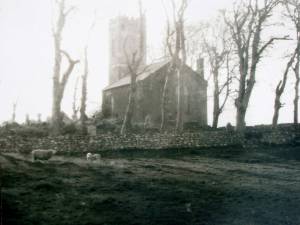 The main part of the cemetery contains over 350 graves. The exact amount is probably a lot more than this. The protestant section of the graveyard contains 11 graves.

Up to a few years ago the graveyard was overgrown and it was extremely difficult to gain access to it. A cleaning up and restoration scheme was undertaken by the local FAS group and since then a number of people have visited the graveyard to search for their ancestors. As a continuation of this project the FAS student summer scheme have recorded all the legible inscriptions, making it very easy for people to track down deceased relatives. A number of interesting facts were discovered when these records were completed. The vast majority of the headstones face to the east and the stones are mostly made of limestone or sandstone. The earliest recorded inscription was on the gravestone of Bryan Finnen who died April 1730 aged 67 years. Some of the other earlier inscriptions include Catherine Sheridan alias Bogg who died March 1746 aged 59 years, and Mary Rice who died in 1777 aged 70 years. There are older graves than this but these have no inscriptions. The standing headstone is the most common type in the graveyard but there are a couple of box tombs and some graves which are enclosed by iron railings. Rectangular shaped headstones, Celtic crosses and high crosses are the main type of standing stone. The design and decoration of these are a credit to the masons of the time and to their skill and perseverance.

The most commonly used images on the face of the stones are that of the sun, the sacred heart, the sacrificial lamb, and the chalice. The most unusual stone is the one erected by Christopher O’Reilly of Williamstown in memory of his forefathers. The inscription begins with the Latin words “Fortitudine and Prudentia” and ends with the word “Nequidultra”. The image is the only one of its kind in the graveyard and shows the arm of a man holding a dagger. Perhaps surprisingly the only inscription in the cemetery in Irish is on the gravestone of McCabes. The last people to be buried in the catholic and protestant sections of the graveyard were John Smith and Harry Kiernan.  Billy Kilroy was the last person buried in the protestant section.

A view of Killeagh Graveyard 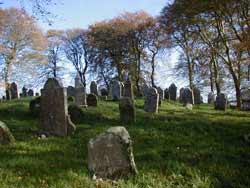 This site provides a search facility to a number of Irish graveyards to help locate a specific grave and a visual look though the graveyard.

One thought on “Killeagh Church and Cemetery”