Full many a flower is born to blush unseen

And waste its sweetness on the desert air.”

These wonderful lines from Gray’s Elegy are so apt and so true.

There were many in our midst who lived spectacular lives but their demure and self effacing nature ensured that they passed to their eternal reward – in the words of Walter Scott’s poem, and oft quoted by the Mammy…”unwept, unhonour’d and unsung”. A man of that nature lived among us in my youth. He was quietly outstanding. He built our church in Ballinacree without ever asking the congregation in general for a bob – well nearly. The Mammy once asked him where he got the money. “I asked all the old bachelors in the parish who had no living relations to help out and to their eternal credit…they coughed up” he said. 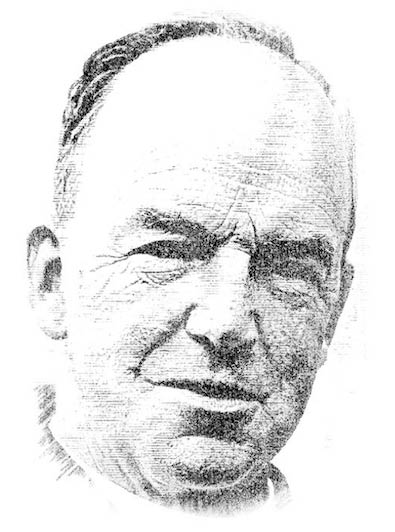 The man I refer to was none other than the Offaly native Fr. Michael Troy. He and Patrick Kavanagh’s P.P. had something in common. They both trained for their priesthood in Salamanca in Spain. It must have been a bit of a shock to the system to have spent seven years in the Spanish sunshine, eating oranges and drinking wine and then to arrive home to Inniskeen or Mountnugent and probably on the type of day when you wouldn’t let a dog out.

My first encounter with Fr. Troy was on a sunny day at the school gable (now the Community Centre) where he taught us the Latin responses for Mass. He wanted us to say “Juventutem meam” but would not allow any slurring over the words or skipping bits here and there. He encouraged us to say and say slowly Juven….tutem ….meam. He made “meam “ into two words….may and am. His favourite phrase was ”Say it again laddie”. We said it again and again and hence I can still say it today.

The De Profundis was that bit at the end of Mass from Psalm 130 or in English Out of the depths. Lots of lassies and lads used De Profundis  as titles for their poems.  We’ll mention Oscar Wilde, C.S.Lewis and Christina Rossetti. The great Elizabeth Barrett Browning and indeed Baudelaire and the famous Dorothy Parker amongst others.  The Latin version we had to learn for Mass had some testing lines like:

We used take a good run at the De Profundis and hoped that with a bit of speed and the occasional slurrying of words together one might reach the end line and could then relax.

This was grand with Fr. Butler or other quiet, gentle curates but inevitably with Fr. Troy the call came in the middle of the slur “Say it again laddie” This was a heartbreaker but had to be endured. Eventually one could grab the biretta, pass it to Fr. Troy and escape to the freedom of the sacristy.

My youngest brother who shall be nameless, to protect the identity of Finbarr, was out in the yard one day when a cock flew up and pecked him on the cheek. He left a mark the size of a sixpence – in old money – or a five cent piece in today’s lingo. The resultant mark was bright, purple and hard, and not a pretty sight. Our sainted Mammy took Finbarr to the Doc. who said ”We’ll wait until he matures and then we’ll have it surgically removed”

One day shortly afterwards Fr. Troy called and Mammy showed him the mark on Finbarr’s cheek and suggested that he touch it. She believed that if he touched it the mark would disappear. A few days later one of my younger brothers alerted Mammy to the fact that the bruise…mark…lump..or whatever it was had gone completely. ‘That was Fr. Troy’ said the Mammy confidently.

We once had a wonderful cow who gave us more milk than any three others. One fine day the Da came into the kitchen to the Mammy to say that the “good cow” was above in the field and couldn’t get up because of “milk fever”. Milk fever in those days affected the best cows in the herd and was generally fatal. The Da was distraught and not a very happy bunny. The Mammy suggested that he head for the parochial house in Mountnugent and tell Fr. Troy  This he did and was advised by Fr. Troy to go back home where he would find all his cows walking around the field and grazing. This proved to be the case. The Da became a bit more religious for the next few weeks or so and then reverted to normality. 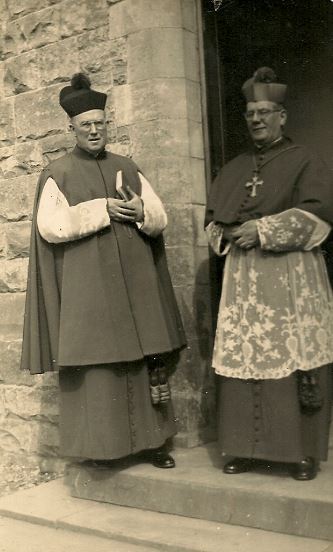 Fr Troy with then Bishop of Meath Dr Kyne c 1954

One day a woman who was a pal of the Mammy called to say that her small daughter was suffering from a constant nosebleed and a cure could not be found despite visits to quacks, chemists, doctors and indeed hospital. She was naturally “up the walls”. The Mammy instantly suggested that Fr. Troy ‘was yer only man’ when all else failed. Fr. Troy was summoned and duly arrived. He banned everybody from the bedroom where the young girl was and knelt down and prayed for a while. He then came downstairs and advised the child’s mother to remove the cotton wool from her daughter’s nose as she was perfectly all right.

She has remained “perfectly all right“ to this day.

Now here’s the question: Were these happenings miracles or coincidences or would all three examples have righted themselves anyway? Some folk say that when a man goes to Lourdes with one leg and comes home with two then that’s really a miracle. Some say that if you ask a fortune teller for the winning numbers in next week’s lotto and he or she gives them to you, then they can truly foretell the future. Some call these folk frauds, skeptics or even cynics.

Some believe implicitly in miracles.

Me? I’m a bit of a doubting Thomas and generally need to put the paw in before I believe.

Nevertheless I was around for the three instances mentioned and not only knew the people involved but also knew Fr. Troy. I believe that these three examples were indeed miracles.

Fr. Troy was not a man for publicity and avoided the limelight. He’s probably up there now saying. “Nobody asked you to write that laddie”. That’s true but in today’s world where everything is known, or so we think, there’s no harm in a witness writing about what he actually saw. The girl with the nosebleed and my brother were both probably too young to remember, and unfortunately the cow is no longer in a position to write to the editors of the Celt or the Chronicle to back me up.

But still … I wonder if any of our readers have similar memories of our former parish priest?