The history of Ballinacree Drama Group dates back to the 1940’s, when Sean O’Casey’s plays Juno and the Paycock, The Plough and The Stars, and Shadow of a Gunman were staged in Ballinrink Hall. In Juno and The Paycock Kit Seerey played Captain Boyle and Dinny Fitzsimons played Joxer Daly. There was a shortage of female actors and the part of Mary Boyle was played by Paddy Donoghue. Other plays performed by the group included Troubled Bachelors and Family Secrets. The late Pat Flood, Hilltown, was the producer. The plays were all performed by candlelight, as the rural electrification scheme hadn’t reached the area at the time. The proceeds from the play was used to pay for the rent of the hall and helped to buy instruments for the Fife and Drum band. 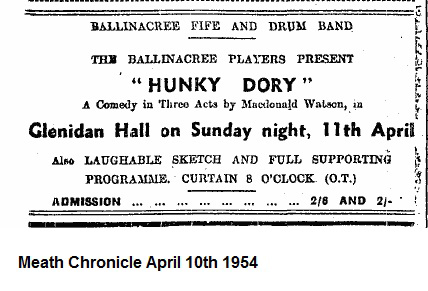 Paddy Reilly, Maggie Caldwell, Jane Farrelly (Connell), Brigid Donoghue (Tobin) and Larry Donoghue displayed their talents playing various leading roles. The group did not confine its talents to Ballinrink, they travelled to Mullahoran, Crosserlough and Cornafean. Barney Flood and Paddy Smith provided the transport. Amateur dramatics went into decline for many years until Fr. Burke came as curate to the parish in 1967/68 and revived interest in drama production.

Fr Martin Burke had a knack of recognizing unsuspected talent. Michael Tighe of Crossdrum, who wrote this piece, and his companions were among the early recruits.

In the mid-sixties life in Ballinacree was very quiet; the main social events were things like the annual pioneer outing to Knock, which attracted the same people every year and the Sports Day. The Football club was still in its infancy. We had all come from the old school days when the boys and girls had been schooled separately in different classrooms and never associated until the day of the Primary Cert when we all sat in the same classroom. My memory of that day is of a girl tapping me on the shoulder and asking me what was 7 times 8; the ice was broken at last.

Then Fr. Martin Burke, a dynamic young curate from Batterstown/Kilcloon parish was transferred to us. He brought a lot of new ideas and got us all on our toes. As he did his rounds of houses visiting the sick or delivering the Pioneer magazine he conducted a sort of undercover listening survey; he was checking out how many young people there were in Ballinacree–and their profile.

He discovered that there were plenty of teenagers and young adults around, but they were shy; his response to the situation was ‘We’ll put on a play. When it came to suggesting names for possible involvement in the play, he enquired about yours truly. ‘Ah he is too shy’ people told him ‘Sure he’d hardly say Hello to you’. “Well we’ll try him anyway’ said Fr Burke, ‘the shy ones often do well on stage.’ I suspect the selection process for the rest of the cast was more or less the same. The cast of new recruits was called together in the old school to begin reading the play, The Green Linnet, a comedy by John J Fintan. I fumbled and struggled with the readings in front of everybody and was terrified when he told us that we had to learn all fifty-six pages like the ‘Our Father’. We spent a few weeks reading and familiarizing ourselves with the story and then serious rehearsals started, a couple of times a week for several weeks. Then came the time for the big decision about where and when the play would be staged. Great interest had been generated so it was assumed that the whole parish would attend; a large venue was necessary – in Ballinacree? Fr. Burke was not short on original ideas. BD Flood, possibly having got a suggestion that all possibilities would be considered, offered the big ‘hangar’ in Rasillagh and the date was fixed, another fairly novel idea –What? Christmas night!

There was a lot of work to be done in preparation for the night.  A stage to be made from scratch; a heroic band of volunteers mined the raw materials out from under the July cut of bales in Andy Carolan’s shed. A concert had to be put together; this brought out a selection of stars new to the Ballinacree stage – musicians, dancers and singers.  Of course the play had to be word perfect. Christmas day arrived; the lines of the play were rehearsed over the turkey and ham in many a house in the parish. The stage was ready and curtains and lights in place. Hundreds of people came that night to a Ballinacree version of drive-In theatre.

Some cars made their way into the big shed past bulldozers, dumpers, lorries and stacks of cement blocks. The front section was heated by the big garage oil burners; some of the wise ones brought blankets for their knees to keep warm. There was a terrific warm atmosphere all around despite snow outside.  The musicians, singers and dancers got the ball rolling. My first appearance was as – well we won’t say exactly a backup man – to a serious bit of Rory O’Connor style dancing by Georgie Smith. I didn’t have a clue of Irish dancing steps but my effort in distracting Georgie brought many a laugh.

Eamonn Hussey as the temperamental soprano and Michael Clarke, the highly-strung pianist.

It was the first time that any of the cast had stage make-up applied. It was so thick and the lights on the stage were so strong that it seemed the perspiration was running down underneath it; we had been warned not to rub our faces. The play delighted the audience and was declared by all to be a great success. Part of the success was the sheer novelty of seeing some of the actors on stage. We took it ‘on tour’ to a few venues and our confidence increased with each performance.

About a year later we had another play “Don’t Bother to Unpack”. We took this play to a wider audience; now ranging as far afield as Navan. Dramatic success prompted us to take up a new mission – to convince the CEO of the Vocational Education Committee (the then owners of the old school) that Balllinacree needed a community hall; and, of course the school was the ideal building. Our efforts along with the help of many others including Willie Gilsenan our local councillor, secured the school as a community centre at an affordable price. Over the years since then it has seen many a play and countless other activities.

They were great years for all of us who were involved; years in which we forged friendships for life – and in the case of a man I know fairly well – years in which he found himself a wife.